The Task Cycle and 360 Feedback 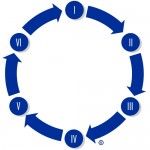 The Task Cycle® is a registered trademark of TruScore®

The Task Cycle® is a logical sequence of steps essential to directing the performance of tasks. It relates core competencies to operational performance and interpersonal relations. The focus is on the interaction between the person who is in charge of that performance and those who are carrying out the task. This pairing of individuals includes: managers and their direct reports, executives and their subordinate managers, sales representatives and their prospects, and team members and their team mates.

I. Communicating goals.
Ensuring that people know what is expected of them and how their work objectives relate to the organization’s strategies.
II. Planning and problem solving.
Communicating steps and solving anticipated problems so that the goals can be achieved efficiently.
III. Facilitating the work of others.
Instructing, coaching, providing the time and resources needed to reach goals.
IV. Obtaining and providing feedback.
Monitoring performance and giving feedback to those working on the task.
V. Exercising positive control.
If progress is off-course, setting it right by implementing the competencies outlined in Phases I through IV.
VI. Recognizing contributions.
Acknowledging the efforts of those who have reached the goal or achieved optimum performance.

When Clark Wilson was first working with this approach, he wanted to make it easy for people to remember their feedback. One of the fundamental tenets of learning theory is that it’s easier to learn a chain of events than a series of independent events. It uses clustered learning versus independent learning.

The real breakthrough occurred when Wilson discovered through workplace research there was a mathematical basis for the sequence he proposed. In other words, if managers, leaders and executives practice the steps of the Task Cycle in sequence, their effectiveness is significantly enhanced.